A White Coat Impostor: 3 Easy Tips to Believing in Yourself 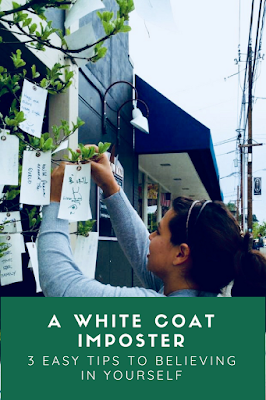 We've all heard the saying, "Fake it 'Til You Make It," but what if you've made it and continue to feel like you're faking it?


I remember the day I graduated from UC Santa Cruz. I remember the weather was a typical Santa Cruz summer day, too humid with a temperature of 70 *F, sunny, and clear skies. I remember trying not to sweat my make up off while I walked down this ridiculous hill to the main lawn where the ceremony was being held. I remember proudly sitting next to the amazing group of friends I had made in my major. I remember being escorted across the stage by my best friend Dr. Snelling. Finally, I remember them saying, "Tess E. Hernandez, Bachelors of Science in Biochemistry and Molecular Biology". Then I remember feeling like a huge fake walking off stage.

After graduation, I immediately moved back to Fresno, California where I started working in the lab that I joined for graduate school. Even though I worked with proteins before and performed quite well in protein-related classes, the feeling of being a fake scientist still remained.

Fast forward to the present, my confidence is increasing, due to receiving a 4.0 GPA my first semester and being complimented by professors on some of the projects I presented during the year. However, somedays I continue to feel like I'm faking my knowledge or that I just really don't know anything in my field of biochemistry.

Does anyone else in the sciences feel like a fake or an imposter? If so I would love to hear about your experiences with this syndrome.

If you don't suffer from this or didn't know this was something that a majority of women suffer from in the sciences, it's called the Imposter Phenomenon.

Impostor Phenomenon:  An internal experience of intellectual phonies, which appears to be particularly prevalent and intense among a select sample of high achieving women. Certain early family dynamics and later introjection of societal sex-role stereotyping appear to contribute significantly to the development of the impostor phenomenon.

In a 5-year psychotherapy study, Clance and Imes studied 150 highly successful women who were respected professionals in various fields or graduate students recognized for their academic excellence. Moreover, all of these women suffered from Imposter Syndrome, they all experienced a lack of an internal sense of success and all of them considered themselves to be "imposters" in their selected fields; inevitably, they were all counting down the days until one of their colleagues outted them as "impostors".

At this point, you're probably asking the same questions that Clance and Imes set out to answer, "Why do so many bright women, despite consistent and impressive evidence to the contrary, continue to see themselves as impostors who pretend to be bright but who really are not? What are the origins and dynamics of such a belief and what functions could be served by holding on to such a belief?" Through their study, they found that the women typically sorted into two groups: women who had a sibling designated as the "intelligent" one and women told they were the sensitive or socially adept one.

In the first group of women, who had siblings that were designated as the intelligent family member, they found that the impostor phenomenon emerged early in childhood. When the child attempted to disprove the family by succeeding in school via academic honors and teacher praise, the families would overlook the child's academic endeavors and continue to praise the "intelligent" sibling. Eventually, the child would question their academic successes and begin to attribute them to luck or other outside forces. Moreover, the child would begin to doubt their academic competence.

On the opposite spectrum, the second group of women were raised to believe that they were superior in intellect, personality, appearance, and talents. In this family dynamic, the child believed that they were perfect in the eyes of the family. Once the child began their academic pursuits, they began to have difficulty. Due to the perfectionism that they believed they held, they realized that they could not live up to the impossible standard that had been set for them. Unlike the first group of women, the second began to question the perception that their parents held of them and ultimately began to doubt their capabilities.

Overall, both of the groups jumped to the conclusion that they were dumb; although, they both obtain high academic marks. Therefore, they must be imposters.

So how does one overcome Imposter Syndrome?

In their paper, Clance and Imes suggest some of the following techniques:


Lastly, what are your techniques for overcoming Imposter Syndrome? Share in the comments!
Labels: Self Help
Location: Fresno, CA, USA

Visit profile
Hi my name is Tess.
I'm a 20-something year old that spends way too much money on coffee and way too much time on my computer. I share my life with another amazing scientist and my two dogs, Max and Tchoopy.